Over 2000 people from all walks of life in Chennai city including hundreds of personnel of the Central Reserve Police Force (CRPF) and Rapid Action Force (RAF) came together to participate in the solidarity march organised by AYUDH Chennai in honour of our recent martyrs. From little children, students to politicians, members of social and business organisations to the common folks, came out in large numbers at the Besant Nagar Beach on Sunday 10th March, 2019 to express their solidarity with the armed forces and the families of the CRPF jawans who lost their lives in the Pulwama attack, sending out a loud message of unity among the citizens of the country when it comes to issues like this.

The formal program began with the Tamizh Thai Vazhthu by Sindhuja Chandramouli. Executive members of AYUDH Chennai accorded a traditional welcome to the dignitaries. The dignitaries offered floral tributes to the martyrs. Addressing the gathering the honourable Governor of Tamil Nadu, His Excellency Thiru Banwarilal Purohit said, “It is heartening to see organizations like AYUDH coming forward to honour the brave martyrs by reflecting the mood of the nation through this act of solidarity.” He thanked the CRPF and RAF personnel for joining in large numbers. In his address Minister for Tamil Language and Culture, Thiru K. Pandiarajan lauded the efforts of AYUDH Chennai in bringing several organizations, communities and individuals together for the solidarity march in honour of those who laid down their lives for the nation and wished it great success in all its future endeavours.

CRPF Deputy Inspector General, Chennai range, S. Elango known as the Iron Man of CRPF, in his address, laid stress on recognising the sacrifice of soldiers every day, who face severe difficulties so that we could live a happy life. He extolled AYUDH Chennai & the Mata Amritanandamayi Math for holding this event as an expression of solidarity to our recent martyrs and the support they have given to the forces. Amma had earlier donated ₹ 5 lakhs each to the kin of the martyred CRPF brave hearts.

He encouraged the youth to be supportive of the forces in their fight against terrorism.

The march was flagged off by the Honourable Governor of Tamil Nadu. ‘Vande Mataram’ and Bharat Mata ki Jai' engulfed the air. Holding placards with photographs of jawans who lost their lives in the Pulwama attack, and quotes expressing support to the brave soldiers, the participants went on a 1.4-km march through the streets of Besant Nagar accompanied by the CRPF band playing patriotic numbers. Senior government officials, Col Krishnaswamy VrC, VSM and several veterans from the various forces also participated in the march. Several people then paid homage to the martyred soldiers, by offering flowers at the Amar Jawan Jyoti symbol.

A musical tribute was also held to pay homage to the martyrs. Present at the event were well-known singers and musicians like Shwetamohan, Navneeth Sundar, Ragavan Manian, @sundarmaalavika, Sivakumar Nagarajan- Agam and Chandrajith who expressed their gratitude to the defence forces. The least we can do is expressing our solidarity with them and to acknowledge the sacrifices they have made while serving us said the artists.

The event concluded with a two-minute silence and prayer for world peace at the venue. We would like to place on record our huge gratitude to all those who graced the event. A special word of thanks to Picture Productions (India) Pvt Ltd for the excellent audio-visual support, Mr Vishnu Vijayaraghavan who brought together the musical tribute, the employees of Sankar Group of companies who went out of the way to help with the organizing and all our benevolent sponsors without whose support this event would not have materialised. May Amma’s Grace continue to guide us to do more and more good!!! 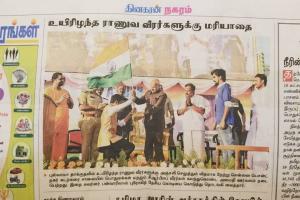 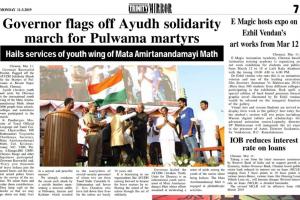 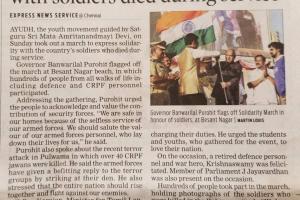 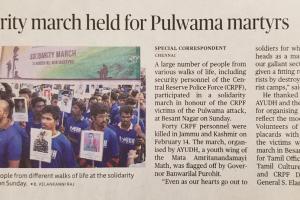 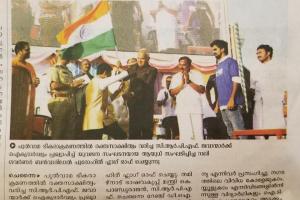 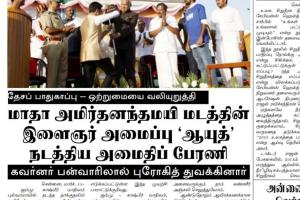 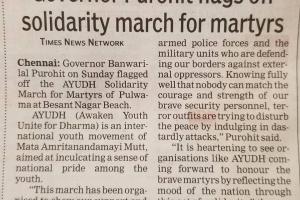